We opened the garden officially in September 2017, complete with new paths, ramps and an accessible WC.  The cabins are painted, and services installed, and we are using the garden for retreat days, and it is open to the public most days of the week.

Our vision for the rear garden at Acomb Methodist Church is to create a peaceful, safe, community garden open to the public. We are transforming what was a fairly large but extremely neglected space, full of perennial weeds, into a community garden open to the public.  This is one phase of a £664K redevelopment of the church – more details can be found under ‘Jubilee Project‘ on our website.

The Story So Far…

For latest activities and photos see our BLOG – follow this link – https://jubilee-blog.herokuapp.com/

In the summer of 2018 we decided to add a new patio area besides the central crossing area.   Shown here with a wooden bench and some temporary chairs.

The Design and History

To donate to our project go to our donations page

This new garden is planned to be served by a new garden room extension to the church, with large glass doors opening onto a patio at the rear of the church buildings.  The garden space will include a large log cabin insulated and heated for all year use.  This will be a focal point for those using the garden and have facilities for making drinks.  It will also be available for groups to book at other times.  We hope this will provide a great place to encounter new people and build friendships. 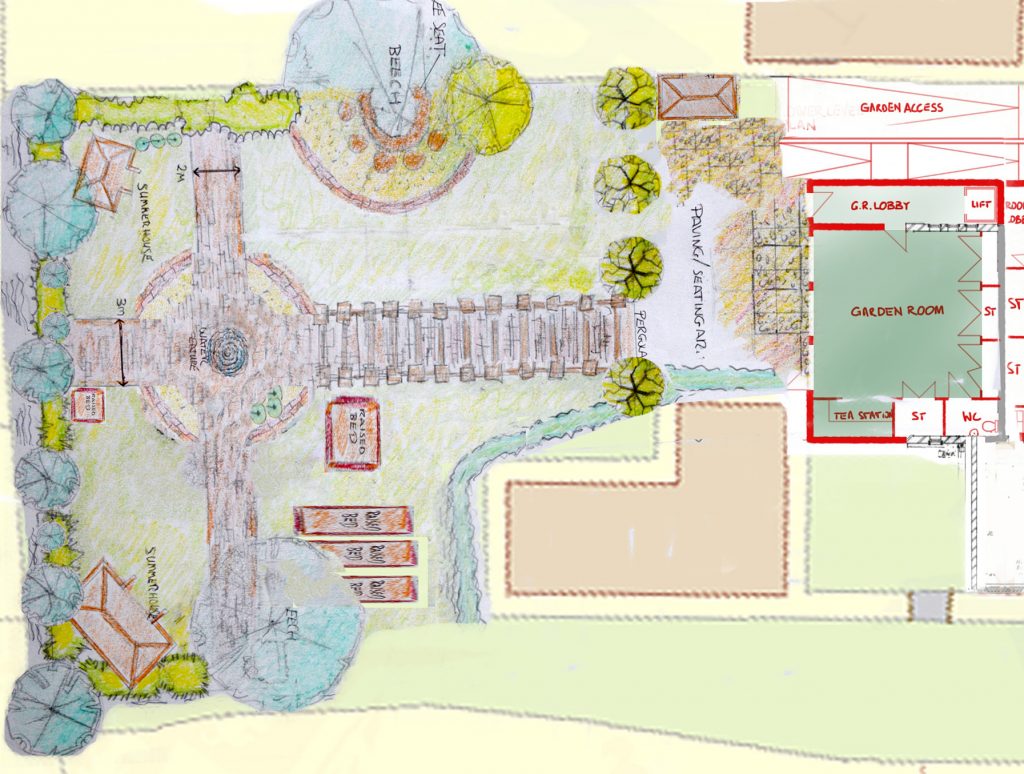 The summerhouse will be another smaller space for two or three to sit, shelter and chat.  It would be a good place for more private conversations, art, reading or simply sheltering.  This space will not be booked, so will be available during daylight hours.

Finally a large open sided potting shed, will provide space for our volunteer gardeners, for demonstrations, talks and just getting involved! 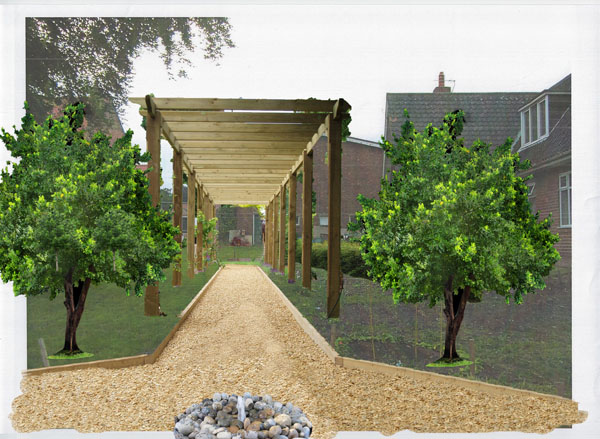 The plan above shows an artists impression of the layout of the new garden, which will comprise four different zones, each with a specific goal.   The garden room show is an extension to the existing church building.

The image to the right is a photo-shopped early mock up of how the paths and pergola might look, viewed from the centre of the garden.

Each of the four zones, or garden rooms within the garden design will have different planting styles.  One will be prairie like, another flowers, there will be zone with things like willow tunnels for the kids, and one with raised beds and vegetable growing.  The produce grown will be either sold to raise money for foodbank (or directly donated) or processed into jams and chutneys and other produce to do likewise.  We are open to community groups to join us in creating our garden, Green Shoots, a partially sighted group has already joined us, as have Brownies and Guides.

There will be seating within each of the zones, for people to relax and find a quiet corner.

Phase 2 of the Project

Our focus for late 2016 was to lay the utilities for the buildings, hardcore paths, build the log cabin, summerhouse and potting shed, and create a pedestrian access ramp suitable for wheelchair users or those with buggies.  At present the access is a rubble slope, or steps, which is no use to either.

This photo is a mock-up of the log-cabin and summerhouse placement in situ against the bare plot (2015), giving a sense of the layout.   Obviously when the other garden features and beds are in place there will be more a sense of four garden rooms, within the grounds.

Following this we will install lighting, CCTV, a pergola along the walkway, new raised beds, and continue to develop the formal planting scheme.

The total cost of the garden scheme is £66.5K.  We have been successful in obtaining approximately 50% of the monies needing, and await a decision from Westfield Ward, the Methodist District and Methodist UK in Autumn 2016 so we can continue to build.

Weed City – believe it or not it looked like this after we’d done a pre-clear the year before of brambles. working on the environmental principle that where possible we waste nothing.  The battered 8×6 greenhouse which was mangled was moved and transformed into a small 6×4 greenhouse in the manse garden.   The rubble dug out is being used as hardcore for the summerhouses bases.   The logs, saved to make natural refuges, and seating.

We began work on clearing the idea in the spring of 2015.  We were very grateful for the loan of a JCB to move the topsoil and level the space and following that an expert arboriculturalist from Harlow Carr who helped us remove dead trees, and trim the remaining ones.  Hoards of volunteers then dug and weeded the space and a small team of enthusiastic amateurs and volunteer professionals worked on the design.

By April 2015 we had cleared the ground of weeds (the first time), marked out the spaces and planted a native hedge around the bungalow.  A generous donation of turf completed this space on the 1st of May.  Meanwhile, butterfly friendly seeds were sewn (donated by a local garden centre), and grass seed for the children’s space.   Vegetables have been planted and paths marked out.

The planting has included some new fruit trees in the far right hand corner. The photo to the right shows the extent of the site, and wonderful work done in the clearing and weeding so far. (June 2015)

By July 2015 the wildflowers beds were flourishing, and the newly laid turf and grass seeded lawns were looking lush.  The potatoes and other vegetables were thriving, and the Brownies have planted tomatoes and flowers.   The borders have been strimmed and sprayed to clear the perennial weeds.   Other flower beds are also bursting into life and a scarecrow has been added by Messy church.

We gained planning permission, which was required to put in place the hard landscaping features in December 2015.  In the meantime we have marked out paths, and done interim planting in the beds as we continue to eradicate the weeds that resurface.  Gill Mason is keeping the City of York up to speed with a regular slot on Radio York, and we have embraced some new volunteers from the community through our activities so far.

By August our temporary vegetable patch had produced a wonderful harvest, making our annual harvest service a real celebration.  All the food grown was sold to raise money for foodbank, or to plough back into the project.   We used the flowers from our wildflower bed to decorate the church.

By April 2016 the newly lawned areas were well established and the native hedges fleshing out.  New boundary trees were thriving.  In Spring we were beginning to add more permanent features.

Limitation by our grant funders meant that we couldn’t start the serious hard landscaping, but we installed three raised vegetable beds (so we can rotate crops), and a tall bed, suitable for those in wheelchairs, and accessible by Green Shoots, a partially sighted gardening group that are partnering with us.Here you see photos of the volunteers constructing the beds.

The produce this year was even better than last year, and the wildflowers looked stunning!

This is presently the only way in and out of the garden for the public, and as such we are fundraising for a pedestrian ramp, as well as accessible WC.   Hopefully also the cabins in the Spring of 2017.

We are excited to finally get in the utilities (water, electricity & broadband) for our new log cabin and summerhouse, and laid the new paths which will give us vastly improved access to the garden.

Also, in 2016, following the donation of some oak timber, the new seat that will surround one of the trees is taking shape.

Completed in January!  With scriptures chosen by the church around the top panels.

In February 2017 –  we got round to completing a summerhouse for one corner and below the new Log Cabin, partially erected with side store underway!

The vegetable beds are looking good now too! With the partially sighted groups raised beds over to the left.

All through the project here have been regular gardening days and all generations of the church have been working together to create a space for all!   If you’d like to join us, see the next garden day here